We’ve all hit that point in life where we wonder, “what am I doing it for?” Why can’t I find love, luck or joy in the things I do in life?

This is precisely what happened to me towards then end of 2017 / early 2018. Everything seemed to be coming apart. Although I felt proud of what I achieved, I could tell I wasn’t fully myself yet, something was itching inside me, almost begging to come out. As the summer of 2018 was approaching and the temperatures began to rise, I noticed the temperature inside me remained cool, like I had a cloud over me.

Then one day I was thinking back about an epic 14-day cycling trip I made to Venice (Italy) with 3 friends and a former teacher of mine and how this trip changed me and the way I looked at life.
Back then I was a naïve 17 year-old who had overcome a severe knee injury 2 years prior and had just embarked on a career dedicated to helping people with disabilities. The trip taught me all the basic skills, from washing your own clothes, to building your own tent, to fixing your own punctures.

Embarked as boys, came back as men

12 years later, after several highs and lows, I’ve realized that the basics of that trip still apply: Take care of yourself before you can take care of others.

Prior to one of the many LCC club rides I participated in I got into a conversation with the well-known long-distance diesel Ralph Cullen.  He told me about sleeping in hedges and how local delicatessen could draw him towards a town even if it meant extending the day’s total covered distance. His tales slowly stirred up my ambition to set out on a bike-packing trip.

Going for the safe route with plenty of back up plans I decided to set my goal for Nice (France).
Strava’s route builder helped me construct a point to point course that would hit every landmark that I felt like going for, including many that I had fond memories of from the past. After some tweaking of the route to make it easier on my Garmin Edge 810, I focused on the 1st of September as the day my journey would embark.

The first day was 220 kilometers of pure pleasure, my legs felt like diamonds and the weather conditions were golden. As a send-off, my step-dad and an uncle joined me during the first 150 kilometers.
After a well-deserved Grimbergen and a good meal I checked in to the nearby B&B, eager for more! 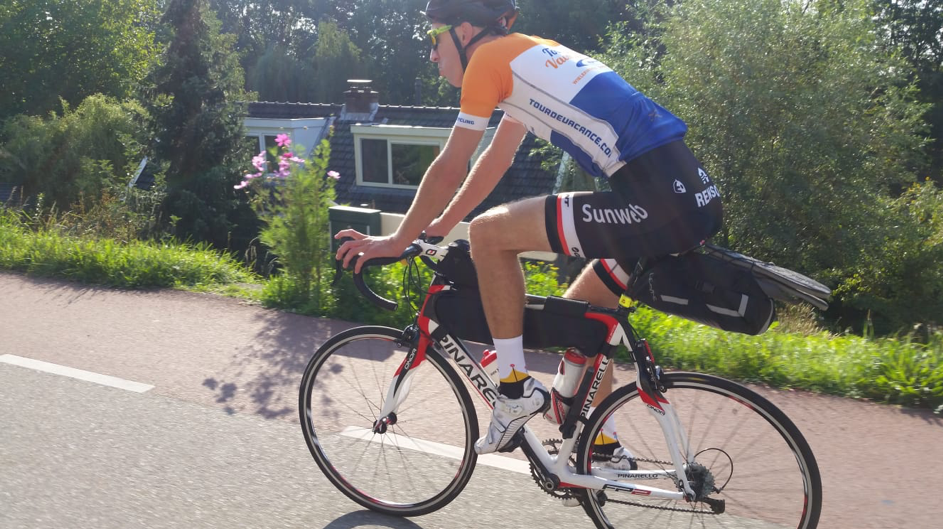 This day, looking back, was the unofficial start to the journey. Waking up alone, packing up my bags alone, checking the tire pressure alone and battling my way through 2243 meters of altitude gain alone. Hitting both iconic (Camerig) and fond (Durbuy) places the first tears started to drop, intense sadness combined with a great sense of relief and joy sent goose bumps all over my body. I discovered that I had the inner ability to overcome any setback that may arise. What a feeling.
A sense of a routine started to form. Around 17:00 (each day) I’d begin trying to figure out the nearest town in reach that had plenty of good restaurants and sleeping accommodation options.

After 80 kilometers of hilly terrain I reached Luxembourg. Here the roads finally flattened out a bit and for the first time I rendezvoused with the Moselle river which lead me straight into the comforting arms of Metz. The fatigue began to creep up on me and I logged my first 12 hour sleep of this trip.

Having a hard time keeping any kind of pace, I battled my way through, to be fair, the most boring part of this trip. Long, seemingly endless roads, flowing through  tract after tract of seemingly endless farmland.
Arriving in Gérardmer at the base of the long and fearsome Schlucht – Hohneck climb. I found Hotel La Marmotte and was greeted by the sweetest hotel hostess I’ve met in my life. She almost immediately offered to wash my clothing (!), which must have smelt like the ass of a buffalo after only being able to hand wash it in sinks for the past few days.

It’s funny how food can taste heavenly when you push yourself like this, day in and day out, because I’m pretty sure I had the best pizza ever, accompanied by the greatest glass of Grimbergen, just before  crashing into a long and deep sleep.

One of the big advantages of hitting the Schlucht – Hohneck climb is that you reach a 1200 meter high plateau which you can follow all the way to the 1325 mt. Grand Ballon, making this day doable for my tired and sore body. Basel showed itself as a magnificent multi-cultural gathering of happy souls along the Rheine river, a great spectacle to watch. The youth hostel was pretty noisy, but to be fair, compared to the other nights it might have taken me 5 more minutes to fall asleep.

This day was a short 100 kilometer spin towards my BBB&B (Benno Beer Bed & Breakfast).
Lovely to finally spin the easy gears, although you shouldn’t underestimate the terrain out here! Felt like I was riding a Swiss version of Liège-Bastogne-Liège. Benno is a guy who I met through cycling in The Hague, he joined me and my friends on a loop around the Ijsselmeer a few months prior to my bike-packing adventure. He immigrated back to Switzerland and as soon as he heard I was planning on doing this trip he offered me to stay over at his place to rest up. And so I did: with a lovely pool, good Swiss food, a kind wife and two awesome active boys it helped me recover my strength.

The following two days I explored the surroundings, with the awesome medieval town of Bremgarten around the corner and the busy but still interesting city of Zürich nearby. In both towns I caught up with friends I hadn’t seen in years. A perfect rest stop.

With my body feeling replenished I continued my travels, riding along the big lakes of Luzern and Interlaken I had one of my most precious days on a bike! After six hours of riding and the Jaun pass standing in my way I decided to look for a nearby B&B. I found a spot run by an elderly couple and slept in what looked like their son’s room (whether he was still living there at age 50 is still a mystery). The elderly man had a garage in which he used to maintain a vintage Jeep. It was an honor to park my bike aside one of these legendary machines!

Nothing like riding up a pass first thing in the morning. After that a lovely descent into Lausanne and its great lake along my left side. F@%# it’s good to be on the bike!

This must have been my most epic ride (I think I even called it epic on Strava). Climbing over the Glandon, I met all kinds of other travelers on their path to happiness and self-fulfillment.

The following three days I took a break, as in, I removed the bags and climbed both Villard Notre Dame and the Galibier, offering my services to Tour de Vacance which were (still) around guiding people over the epic Alpine climbs. 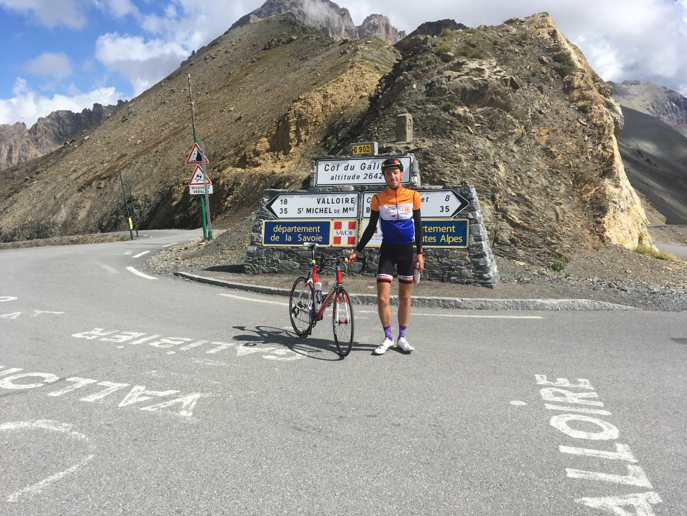 Climbing two, 2000-meter, giants (Lautaret and Vars), then finishing at the feet of Cime de la Bonette, what’s more to be said here? Big. Day. Out.

The final day! After a grueling long climb up the Bonette it was supposed to be gentle descending all the way to Nice. And it would’ve been had it not been for the wind blowing right into my face. It was at this point I just about had it with the lumpy bags hanging on my bike.

After one final surge of energy I parked my bike on the boulevard, content in the knowledge that I am strong, resilient and that I decide my own path in life.

I stayed on in Nice for weeks following my arrival soaking up the art centers, beaches and generally experiencing the Southern France way of life. I used Café du Cycliste as a sort of cycling base-camp and met a lot of amazing people there. It was an awesome way to recover and ‘land’ from the highs and lows of the bike-packing trip.
And land I did. After months of feeling frustrated with my former job and my dead-end relationship, I felt a great sense of achievement and fulfillment that helped me  detach from both. With a bit of self-confidence in the bank, I could now finally embrace the sadness. Crying both on and off the bike is, even though it might sound weird, a good feeling. In my experience, one of the greatest gifts you can give to yourself is the freedom to feel.

I had my tough moments, definitely, but meeting the right people, both planned and coincidentally, helped me get through it all. Love yourself before you can love another, and don’t ever forget to respect what you feel. Love riding, keep riding!

View all posts by kar