As in the seventies when Muhammed Ali shocked the world in Congo during the “rumble in the jungle”, anticipation mounted for the debut performance in Congo of the mixed team of Kenyan and Dutch riders.

Tour du Congo was the stage, three Kenyan and two Dutch riders the protagonists, accompanied by the energy of Lola Bikes and Coffee, KNWU (Dutch Cycling Federation) and Cuore of Switzerland – a new team was born: TEAM AMANI.

As every rider knows, and most of us take for granted, racing opportunities are at the heart of our sport. However, in certain parts of the world (and especially in East Africa), amazing talent is being denied the opportunity to showcase their skills due to corruption or mismanagement. Creating opportunities for these riders and helping them break the glass ceiling is the central focus of the Amani Project. Combining Dutch experience with Kenyan talent proved successful from the start. Two Dutch diesels were sent to Congo to set the pace and shelter our secret Kenyan weapons from the wind. Fifth place and the prize for most combative rider were achieved by Salim from Team Amani on the very first stage!

Besides racing bikes, the Tour du Congo is also known as the waiting game. The race was postponed by a week before we even boarded the plane to Congo. A combination of the Ebola crisis, civil unrest, lack of planning and/or a lack of budget?  We were never really informed what the reasons were. Once we arrived in Congo, the race was once again delayed by a week as rumours were that the new president,  his excellency Félix Antoine Tshisekedi Tshilombo, was considering attending the opening ceremony in Boma. Alas, despite the delays, we never saw him wave us “au revoir, bonne courage” at the grand depart. The waiting game may have been one of the toughest challenges to overcome. It required a paradoxical mental mindset of being able to both let go (so as not to succumb to anger or anxiety) while also being ready to get on the bike and race at any second. After a couple of weeks of waiting, we became accustomed to the Congolese proverb of “no worries, tomorrow we start”. Well yeah…eat, sleep, bike, repeat. Another day passes and no word.   We did do a number of preparation rides in some absolutely stunning landscapes. And then, finally, race day!

The waiting was worthwhile, that was clear straight from the start. After an opening ceremony of about two hours, we finally clicked in and started racing from the city of Boma. An astonishingly big crowd had gathered at the start.  A thick, sweating, screaming, whistling and smiling crowd sent us off with a bolt of energy. The lines of spectators, seemingly 5+ deep, carried on for kilometres! If the ASO (organizers of the Tour de France) want atmosphere, they should have le Tour´s grand depart in Boma next year. It was simply electric.

We expected a lot in Congo. Especially last minute arrangements for hotels and transport. And that’s what happened. The usual suspects made their appearance: 14-hour bus transfers, days of waiting in between stages, no showers, wrestling other riders for a plate of rice in the evening – all part of the deal! However, despite having raced in many African tours, we were not prepared for the chaos we encountered on the parcours. The occasional pothole, or pot-crater, was to be expected every now and then. However, the presence of three concrete squares across the road (designed as speedbumps), only thirty meters before the finish line was a whole new level of ‘suspense-effect’ by the organisation. As you would expect when you are hurtling down a hill at 60 km/h in preparation of a bunch sprint finish with an eighty man peloton on your wheel – complete and utter destruction ensued.  The first thirty riders smashed into the blocks. Bodies were flying everywhere, including 4 out of 5 of our teammates (lucky you, John!). Two broken bikes and five broken hearts. Team Amani was forced to abandon the race just as we were getting set to make our presence felt. Concrete – 1, Team Amani – nil.

In the words of the great Rocky Balboa, “it ain’t about how hard ya hit. It’s about how hard you can get hit and keep moving forward.” So here we are, three weeks after the Tour du Congo, Salim, Geoffrey and John are riding the African Games in Morocco, Florian finished top 20 in Ironman Copenhagen and Dennis is back training in the Pyrenees. The birth of team AMANI is a fact and we who had the honor of racing in the blue and white won’t easily be deterred.

It’s exciting to be part of project with so much potential. The Tour du Congo team was just the tip of the spear.  The team is born and our ambition is to continue to create opportunities for both men and women to showcase their talents in 2020. What’s that you said? A regional team based in Holland with mixed composition (European/East African) #justracing wherever we can get an invite? Sounds great!

And for this grizzled veteran, I might explore the option of handing out bottles from the team car rather than from the back of my jersey. Who hasn’t fantasized about becoming a Directeur Sportif? Who knows? Stranger things have happened. 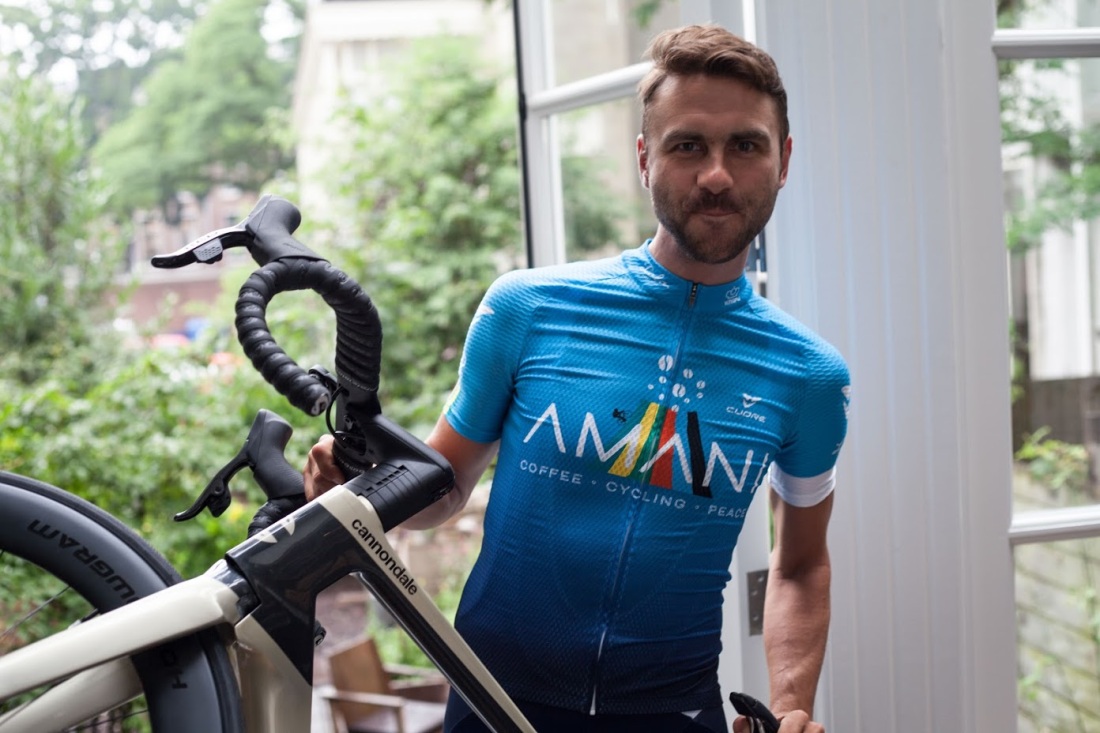 View all posts by johnnymingbo

One thought on “Tour Du Congo”